A theatre innovator in cooperation with an introverted writer and with the German Theatre of the Year test the potential and limits of artificial intelligence in an intimate closeness to the audience. A trip into the hidden corners of the human psyche in a sophisticated essay by the director Stefan Kaegi concerning the impact technologies have on our bodies and mind– performed by a quite unique actor…
In cooperation with the SEFO 2021 Triennial. Czech audio in headphones. 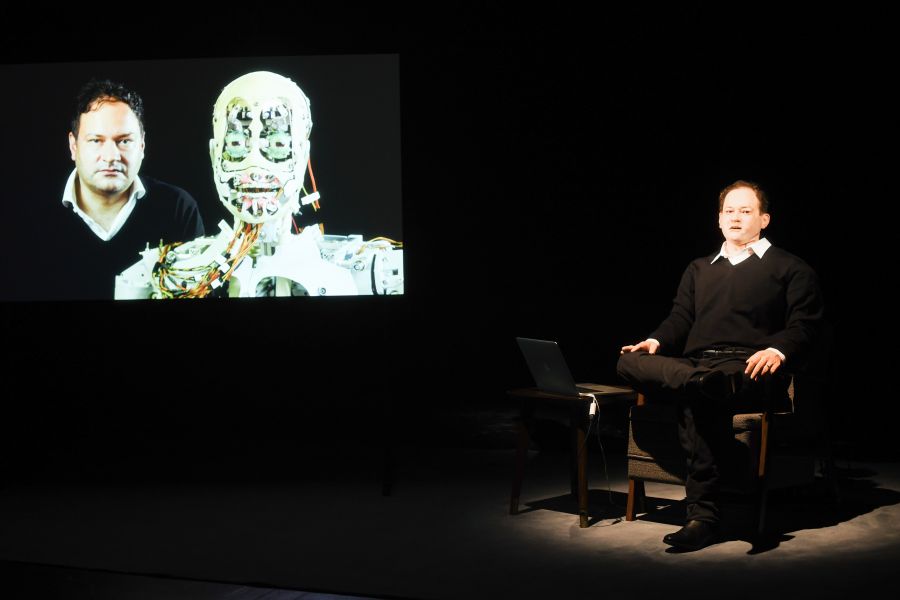 Kaegi does not need more than one avatar, one screen and one spotlight to present the self-reflective, ambiguous and intelligent thoughts of Thomas Melle.
Julian Ignatowitsch, Deutschlandfunk.de, 5 October 2018
The impressiveness of the production is not only based on the meticulously constructed and cleverly connected details but also in the fact that it revolves around basic theatre questions: What is a human being? Who speaks to whom and why?
Sabine Leucht, Nachtkritik.de, 4 October 2018

Stefan Kaegi, one part of the world-renowned directors’ collective Rimini Protokoll, has been toying with the borders of what the word ‘theatre’ can represent for twenty years already. He substituted actors with experts from the streets, seated the audience into the trailer of a truck, or made them delegates in a simulated climate conference. The audience often needs technical equipment such as headphones, tablets or smartphones. Kaegi and Rimini Protokoll simply do not follow any traditional theatre rules but instead create them once again in the spirit of modern times. As a result, enthusiastic theatre audiences from New York to Singapore or Melbourne can enjoy an exciting and once-in-a-lifetime experience.

Kaegi, the “theatre inventor,” joined forces with the renowned writer Thomas Melle and the awarded theatre Münchner Kammerspiele in Uncanny Valley. A unique Frankenstein project was created which captivated audiences across the globe: the production does not have any actors on stage, but a robot modelled after none other than the co-author Melle. The introvert writer has been fighting diagnoses of a bipolar disorder and if he had a choice would escape public life altogether. He sees a chance to finally get his public performance under control in his doppelganger: “After sharing the part of my mind that I extracted for my book, I have now outsourced my body and can let it do tours and all the unpleasant stuff.“ This seemingly utopian thought becomes the starting point for the production, where a robotic speaker invites us to the riveting world of prosthesis, 3D printers and AI to look deep at the very bottom of the human heart in the end.

What makes a human being human? How does he or her differ from machines and what do they have in common? Where do the borders shift in a world where genetic engineering grows and chips get implanted under the skin? Considering even the robotic Melle winks, makes gestures and nods… Anyway: Is this even theatre at all? Or is its future form taking shape right in front of us?

“Our humanoid, on the other hand, had nerve (electronic) contractions in the fingertips during the trials and after only two representations the neck was broken, although it could be repaired in the two hours remaining for the third representation. The adrenaline highs that caused the incident in all those involved were no less than if it were the aphonia in an opera singer. And yes, I have rarely felt so afraid of an interpreter. Rarely so much empathy. No wonder, because it had never happened so much time teaching an actor to speak, word by word, defining even the smallest of his wrist movements with a precise acceleration curve to the second. Without being a father, I imagine raising children as a child's play next to this. Because, like any robot, it can also do just what it has been built for: in the automotive industry, robots know how to build cars, but not embrace; chess bots can make a checkmate, but not cook; and, similarly, this theatrical robot cannot kill or love, but only act.”
Stefan Kaegi (production leaflet)

The Berlin-based collective of directors Rimini Protokoll stands on the borderline of theatre, performance and conceptual and installation art. It was founded in 2000 by Helgard Haug, Stefan Kaegi and Daniel Wetzel, who work under a shared name in various constellations. The name reflects the method of creation – which is not founded on interpretation of a text with an outlined message, but rather on research, a registering of the “rules of the game” (Protokoll) – it also refers to the play with the onomatopoeia of the compound (Rimini). They create their stage productions, interventions, performative and sound installation often in cooperation with experts from other than the theatre field. Those so-called “experts of the everyday” often perform themselves in the Rimini Protokoll projects.
Many of their awarded works feature interactivity and the playful use of modern technology. For the multiplayer-video-walk Situation Rooms they built a hyperrealist set in which the 20 audience members follow the tracks of people whose biographies have been shaped by weapons. Their tetralogy Staat 1–4 focuses on the phenomenon of democracy and state control.
Rimini Protokoll aim to study the structures of society and presence in all possible aspects and view them from unusual and new perspectives. This way they, for example, simulated a parliamentary session with the participation of 200 inhabitants of Bonn (Deutschland 2); in a performance for one audience member Call Cutta, they transferred on stage a phone call with a worker in an Indian call-centre or in the Schauspielhaus Hamburg, they simulated a UN conference about climate change Weltklimakonferenz (2014). In hundreds of households all over the world strangers are currentlyy playing the parlour game Homevisit Europe, which is searching for visions of the European continent. The world cities lose their anonymity in another project called 100% City, where 100 statistically chosen inhabitants of a city gather on a theatre stage.
The ingenious productions of Rimini Protokoll enjoy great international interest and appreciation from the non-professional as well as expert public as demonstrated by recurring invitations to the prestigious Theatertreffen festival and various awards (e. g. Faust, European Theatre Award, Silver Lion at the Theatre Biennale in Venice and others).

The artist Stefan Kaegi (1972) was born in Switzerland and makes up a third of the Rimini Protokoll ensemble. He stages documentary theatre productions, sound installation as well as site-specific productions where he often combines the economic relationship with the impact on people. For example, his journey around the world in the cab of a lorry with two Bulgarian drivers led to the road-project Cargo Sofia-X (2006; then Cargo X, 2019), where Kaegi adapted a trailer to a mobile auditorium for 50 audience members/passengers. His immersive sound excursion Remote, inspired by GPS navigation, can be currently heard in such different urban locations as Santiago de Chile, Shanghai, Moscow or New York, and enables the visitors as well as inhabitants of the city to together experience a unique walk. In the production Nachlass (Rooms Without People) at Théâtre Vidy in Lausanne, he prepared a show with people who do not have very much time remaining before their death. He was awarded many international prizes for his projects, such as the prestigious European Prize for Cultural Diversity. In 2019, he created a humanoid robot to perform as a clone of the German writer Thomas Melle in the production Uncanny Valley.

The writer Thomas Melle (1975) studied comparative literature and philosophy at the university in Tübingen, in Austin, Texas and in Berlin where he currently lives. His debut came about in 2004 with his theatre play 4 Millionen Türen (4 Million Doors), later he was twice nominated for the prestigious Mülheimer Dramatikerpreis award for the best first produced German production of the year: for his drama Bilder von uns (2016) and Transfer (2018). He primarily gained renown, however, as a prose writer. His novel 3000 Euro (2014) was shortlisted for the German Book Prize, just like his highly-appraised autobiography Die Welt im Rücken (2016), which was – as the only book by Melle – published in Czech translation in 2018 under the title Svět v zádech. The author provides unique insight into the life and mind of a man who suffers from a bipolar disorder. Burgtheater Wien produced an adaptation of the novel directed by Jan Bosse with Joachim Meyerhoff in the leading role. It was invited to the prestigious Theatertreffen festival in 2018.

Münchner Kammerspiele is one of the most important stages in the German speaking theatre context. It is considered an aesthetically innovative, contemporary cosmopolitan city theatre with a socio-political focus. Nicknames such as “the new municipal theatre”, “Munich mix”, “Club” or “Crossbreed” prove its experimental character. Already under the artistic direction of Johan Simons, Matthias Lilienthal and since 2020/21 also under Barbara Mundel, the success of the troupe has been based on a strong ensemble of famous as well as new actors and performers, who are ready to confront and question the present times.
Münchner Kammerspiele has been repeatedly awarded the Theatre of the Year by the prestigious Theater heute magazine. This was also the case at the end of the 2019/20 season when Uncanny Valley was created as well as Dionysos Stadt production directed by Christopher Rüping which became the production of the year.
photo Gabriela Neeb 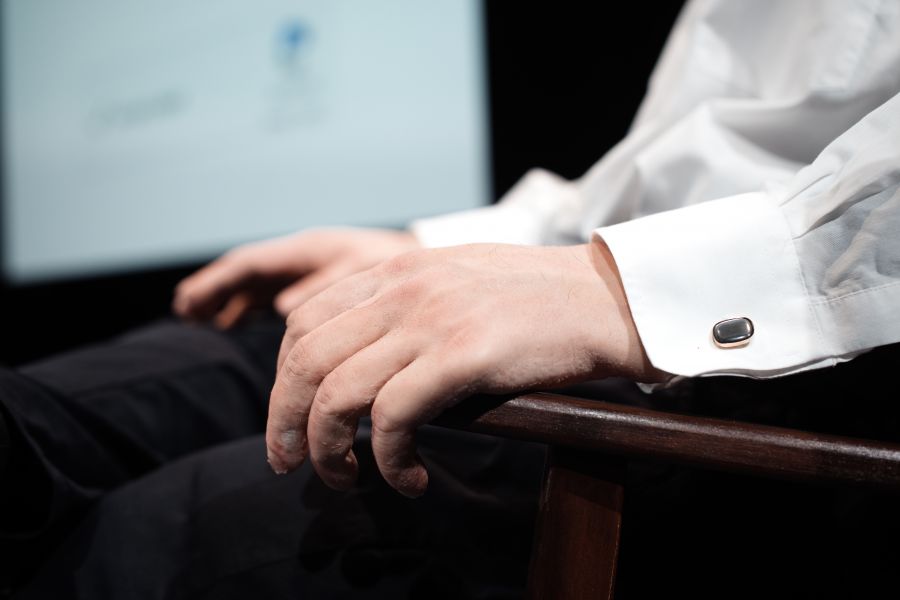 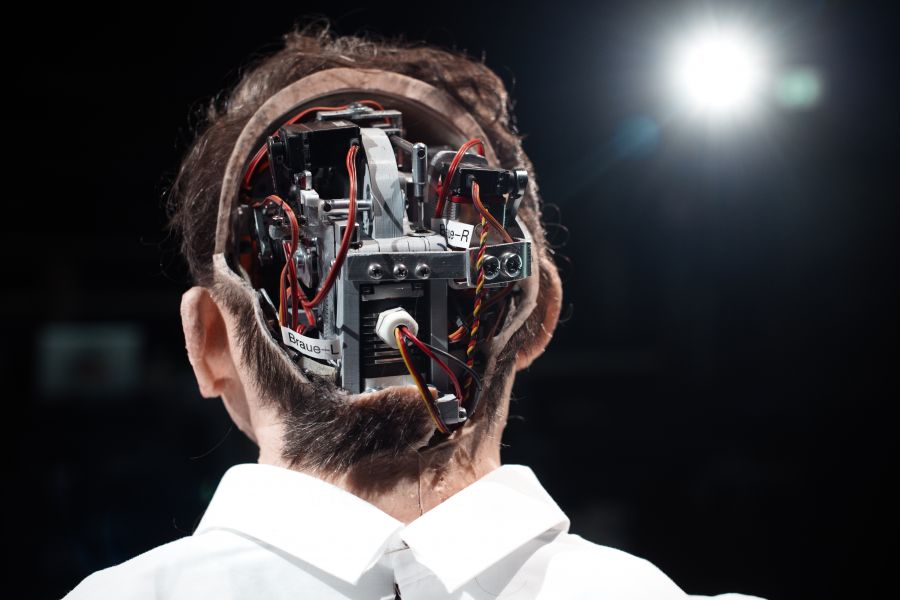 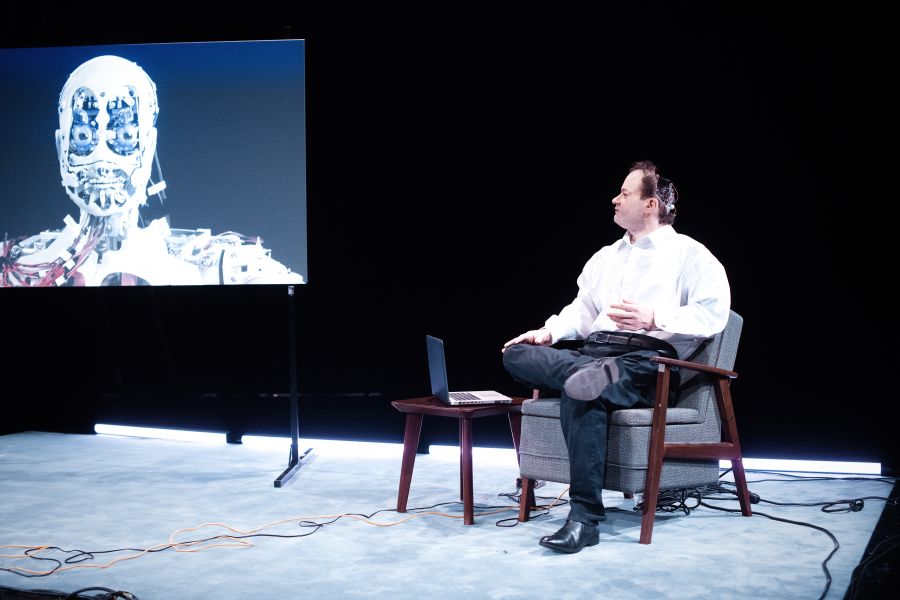